Krav Maga (meaning ‘close combat’ in Hebrew) is regarded by many to be the best self defence system around. We know Krav Maga works and it works under stress. In general, Krav Maga’s techniques are practised because they have been proved to work in real-life situations. Many Krav Maga techniques focus on vulnerable parts of the body and therefore it is not a competitive martial art.

Krav Maga Haim Zut practices the original, traditional fighting style of Krav Maga which is the official self defence system of the Israeli Defence Force and has been adopted by many law enforcement and protection services around the world. 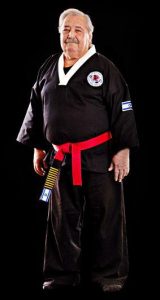 We teach defences against all manner of attacks and threats, including releases from dangerous grabs, chokes, strangles, headlocks and bear hugs. Students progress to defences against various stick/bat, gun and knife threats and  also learn to practice dealing with multiple attackers. Our training techniques are developed from real-life experience and are under constant review by a professional committee who are dedicated to ensuring  the highest quality when imparting skills that may one day be called upon to save your or someone else’s life, as well as promoting other aspects of life such as the values of being a good citizens before being good fighters.

Physical solutions should always be the last resort in any situation, Krav Maga practitioners improve their awareness and adopt techniques to avoid physical confrontation in a safe and enjoyable environment as well as the explosive fighting and defence skills required should there be no other option,

Krav Maga training teaches us how to react when we are completely surprised, this is the way of the street. Krav Maga is an extremely active, fun way to train fitness and endurance levels as well as improve flexibility and co-ordination with the added benefits from training in one of the most effective Self Defence systems in the world, for the situation we hope we’re never in.